A Wisconsin farmer is improving soil health and fertility on cropland he farms across the state border near Waukon, Iowa. He added winter wheat to his rotation, followed by a diverse cover crop. 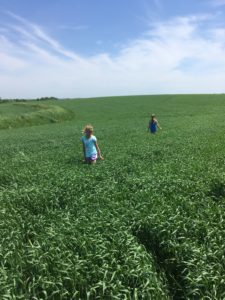 In October 2017, Kramer planted about 110 pounds per acre of soft red winter wheat on 70 acres following soybean harvest. Soil tests he conducted in 2015 when he started farming the property indicated the farm was deficient in many categories, including a compaction layer at six inches.

“The yields on the farm weren’t very good, certainly not profitable,” said Kramer. “I had an idea that farming in these conditions would require something different than the common rotation and practices.  There is more work to do, but we are on track to build something sustainable.”

Because he applied fertilizer at higher rates to build soil fertility, Kramer used a growth regulator on the wheat to help reduce the potential for lodging due to higher nitrogen application rates. Other options for decreasing lodging include using varieties with stronger straw or shorter stems. Kramer also applied a fungicide to help protect against rusts and Fusarium head blight, also known as scab. 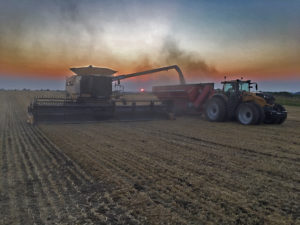 He harvested the wheat on July 23, 2018, with an average yield between 95-100 bu./ac. and an average weight of about 56 lbs./bu. Kramer sold a portion of the wheat to ADM in Boscobel, Wisconsin and kept some for cover crop seed.

Growing small grains may not be highly lucrative in today’s market, however, reduced input costs can improve net returns. “If you grow food-grade small grains, you may be able to get a better grain price,” said LuAnn Rolling, District Conservationist in Allamakee County for USDA’s Natural Resources Conservation Service (NRCS). “If you grow food-grade, organic grains you will receive an even higher price.”

The biggest Iowa-based buyer of food-grade oats and other small grains in the area is Grain Millers in St. Ansgar. “There are people growing food-grade small grains in Allamakee County and throughout Iowa, but there are limited options for buyers,” said Rolling. 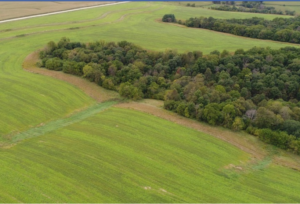 Drone photo of the cover crop from August.

She said, however, that small grains can impact net returns beyond market prices. “Studies have found that diversifying rotations can improve corn and soybean yields in the following years, which then improves the profitability of the entire rotation,” said Rolling.

In addition to the grain, Kramer sold the straw to add to his profits. “When removing straw, it is important to be aware of the nutrients contained in the straw and apply fertilizer rates accordingly,” said Rolling. “Cover crops are especially important on fields where residue was removed to help protect soil from erosion.” 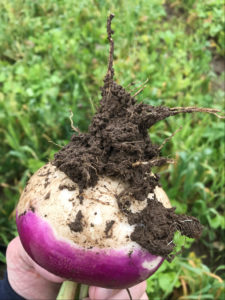 Less than a week after harvesting his wheat, Kramer seeded a cover crop mix of turnips, radishes, Austrian winter peas, sunflowers, red clover, soybeans, oats, and spring barley. “The period after small grain harvest is a great opportunity to plant a mix that will accomplish a wide range of goals,” said Neil Sass, Area Resource Soil Scientist for NRCS in West Union. “The mix Kramer used is great for capturing carbon but also for adding pore space to break up compaction. Pollinators, beneficial insects, and wildlife also seem to appreciate the plant diversity that was introduced.” In early October 2018 – about two months after planting – Sass and staff from the Allamakee Soil and Water Conservation District (SWCD) sampled aboveground biomass of the cover crop mix, then dried and weighed it. Dry biomass samples ranged from 1,510 to 4,600 lbs./ac., with an average of 2,580 lbs./ac. “The biomass levels are similar to what we often see in mid-May with a winter-hardy grass like cereal rye,” said Sass. “These are good biomass levels; a lot of carbon has been captured.”

Allowing livestock to graze cover crops adds additional benefits. Although Kramer had good biomass, his farm is not currently set up for grazing.  Early-seeded cover crops can produce substantial amounts of biomass which can provide good forage. Producers should be careful, though, when selecting mixes to plant species with balanced nutrients and graze them at appropriate heights. It is also important to know herbicide restrictions from previous crops. “If you plan to graze cover crops in the fall, treat it like a prescribed grazing system and keep the animals out of the field in wet conditions and remove them when there are still several inches of aboveground biomass remaining,” said Rolling.

Now is the time to start planning for next fall’s cover crop. There may be financial assistance available for conservation crop rotations and cover crops through your local NRCS/SWCD office. The next signup deadline for the Environmental Quality Incentives Program (EQIP) is March 15, 2019.

Producers in Allamakee and Clayton Counties can apply for EQIP funds through a Regional Conservation Partnership Program (RCPP) project by adding a small grain to a rotation and following it with a diverse cover crop. If you plan to plant cover crops following small grains or on silage ground, try planting a diverse mix to take advantage of the longer growing season. Your local NRCS/SWCD staff are available to help you determine what mix would meet your goals.